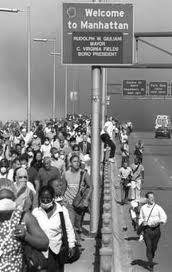 Pretty much everyone knows exactly where they were on Sept. 11, 2001 when terrorists attacked the Twin Towers at the World Trade Center in New York.

You see, I work at a major New York hospital and I have images in my head that will never leave me.

I recall going up to the roof of our building, not too far from the towers and seeing the dust on the rooftop.

Worse, you could SMELL it.

I can't even describe what it smelled like. If I could explain what death smelled like, I imagine this would be close.

I can never forget the hundreds if not thousands of people crossing the bridges in New York on foot, unable to get transportation out of the city. Some of them almost staggered towards home after a day they will never forget.

I remember crossing the George Washington Bridge on the days following the attack and gazing to my right, expecting to see the Twin Towers in all their glory. Yet. all there was to see was smoke covering lower Manhattan, a painful reminder to what had happened.

When asked about her most significant memory of that day, my wife Rosemary tells of the ride home from work (also at our hospital, before we were married) on the train the afternoon of the attack. There were businessmen and women, covered with the white dust and debris that exploded through the streets after the towers fell. They sat in the train, numb and unable to talk of what they'd seen.

In fact, Rosemary related that no one talked on the train, no one at all.

And this continued for days after the attacks.

My Most Lasting Image of Sept. 11

Of all the images imprinted in my brain from that fateful day, none compare to the sight of friends and relatives standing outside the entrance to our hospital, holding pictures of loved ones, hoping against hope that they were taken to the hospital from Ground Zero and someone would recognize them.

You could see the anguish in their faces and the fading hope in their hearts.

You could hear the quiet whispers of “have you seen my husband?” and “help us, our daughter is missing“. Yet there was nothing I could do to help. 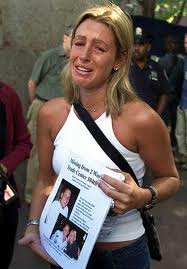 Every night as I exited the hospital after my shift, I struggled to control my emotions as I passed by those that waited patiently for someone to recognize their loved one. It was one of the most difficult times in my life, yet nothing compared to what they were going through.

This went on for days, until eventually everyone realized that there would be no recovery, only the grim task of identification.

The Goodness of the World Shines Through

It's hard to find any good in this tragedy.

But there was good.

Shortly after the tragedy, letters and hand drawn pictures started showing up in the mailroom of our hospital, from all over the US and the world.

Letters from kindergarden classes in the midwest. Hand drawn pictures of nurses and doctors helping patients drawn by young children, with the message…“Thank you for being brave.”

Posters from other medical staffs around the world, praising the dedication and courage of our doctors, nurses, and Emergency Room personnel.

The goodness of the American people and the World shined brightly through these letters and pictures.

In fact, our hospital administration mounted them on bulletin boards throughout the hospital, and they still stand today as a living memory to those who served and those who died.

You Can't Keep Us Down

I can tell you from personal experience that New Yorkers were shaken for weeks and months after the attacks. A feeling of despair hung over the City.

But gradually, things started getting back to “normal” and people began the process of picking up the pieces and moving forward in their lives.

It made me especially proud of the people of New York, to witness their ability to persevere over pain and misery.

Even on this worst day in the history of New York City and the country, they were able to pick themselves off the floor and show the terrorists that they had not won.

What We Can Learn

9-11 was an unspeakable tragedy, yet out of it came amazing stories of strength, courage, recovery and unstoppable spirit.

The amazing resiliency of the American people is what stands forth today as we rebuild the WTC site and commemorate the 10 year anniversary of the attacks.

It will be a sad day of remembrance, but also a day to acknowledge our strength in the face of tragedy and our ability as human beings to move on and even grow from our experiences.

This is something we can all learn from as we deal with the troubles and obstacles in our own lives….

Don't allow anyone to stop you!

More Thoughtful Posts on Memories of 9-11

Be sure to check out these great 9-11 memorial posts as well:

Ken Pickard, the Network Dad's Tribute to the Heroes

Emma Tiebens, The Relational Marketer – Make 9-11 Count for Something

VaNessa Duplessie – 9-11 A Tribute – Do You Remember the Moment?

Janet Callaway – Remembering By Paying it Forward and Thanking